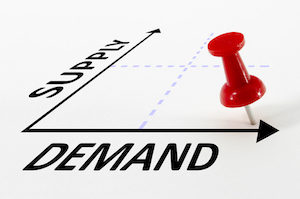 In the last 30 days the plastics market has seen dramatic changes.  In anticipation of material shortages we purchased inventory to try to bridge the predicted price spikes and supply shortages, but this market is unprecedented.  The following commentary from one of our suppliers is the best synopsis of the market that is easy to read and explains where we sit at the end of January 18.

Author:  Cody Bates – The one thing that is will be hard to say right now is that business is slow and prospects are bad.  We are in a great time in the plastics business as more companies are keeping jobs domestic, including large white goods manufacturers, and I have been hard pressed to find many molding jobs going to Asia lately.

As I am sure you have seen, prices have been going up on almost all materials.  This is due to several factors.  I am going to dig in how I normally do, but going in dept on polyethylene, so I am putting that at the end so I don’t bore everyone who does not care about it.

Demand for materials are surging, and the plants on the Gulf Coast have not rebuilt their inventories enough from Harvey to absorb the shock of new year orders like they normally do.  This has led to a tightness of many grades as I will describe below.  The other factor is the cost of feedstock.  Both oil and natural gas are way up, near 3 year highs, and will continue to climb.  This is going to be the floor that most producers need to hold prices up and so don’t see any relief on the horizon.

Now, onto the rest of the story.

PP:  Polypropylene has been the problem child of the day this year.  Total’s PP plant is down and LyondellBasell has declared Force Majeure on their lines of PP.  This is really bad in an already tight market.  While the official settlement for PP came in at $.09/lb increase, I have seen PP up $.10-$.12 per pound this month already.  With the outages, high demand, and high oil prices (breaking $65/bbl for the first time in several years 1/24, and over $.66 on 1/26), I don’t really see and end in sight.  The higher flow materials are tight again, and many of the lower flow grades are getting more snug.  I would not be surprised to see more increases, but I feel we are close to the breaking point anyway in PP, so can’t see too much more.  The smart money is saying that we are going to be tight in PP for the whole rest of the year, independent of the short term problems

Color:  Most of the color producers are going up on the cost of their color concentrates.  This is including whites, blacks, and most of the organic pigments.  We have seen an official letter from Clariant, so you can expect everyone to follow their lead.  On top of that, their carrier resin costs are going up, just like yours, so get ready.

Polystyrene:  PS is up quite a bit, and it is going to get worse.  Total declared force majeure on their polystyrene production at their Geismar, LA facility, and with so few other major players in the PS space, this is going to really push prices higher.  This and higher oil prices are going to be a double whammy.  I have not heard specific numbers, but I would say that $.05-$.08/lb would probably be about right.  Asian prices for polystyrene are up as well, so it looks like any imported material won’t be there to save the day.

ABS:  ABS is following the same track.  I have seen prices steadily going up on ABS, and it is one of the materials that has been covered by the rash of compounder price increases I have seen recently.  Styrene, the main component in ABS is up.  The butadiene rubber is derived from crude, and that is up, so ABS has been basically put in a corner with nowhere to go but up.

Nylon:  Nylon prices, for both 6 and 66, have been steadily increasing.  I have also gotten an announcement that Solvay declared Force Majeure on their supply of 66 coming out of Spain and France.  The announcement states “The supply/demand balance which is already short in Europe reaches a critical situation with this declaration of Force Majeure.”  This is going to be bad as the compounders I rep have been gearing up for a couple of months for these shortages.  Not everyone is ready, and I expect to see some announcements of price increases from the majors coming out shortly, but just want to get you to buy up what you can now so you can make sure you have it on hand.

PVC:  PVC prices have jumped, like everything else, and we are going into the busy buying season for pipe producers as they build inventory for summer construction season.

PBT:  PBT is firm to higher.  No major shake ups that I have heard, but not going down.

PC:  Polycarbonate prices remain high as we continue to see issues with enough material in the distribution network to fill all the need.  This is not as prevalent for folks who can use multiple resins, but if you are stuck in a lower flow Lexan or some of the higher end medical grade materials from other producers, it is not as easy to get material.  With demand up, I don’t see the problem of material tightness not freeing up until at least May.

Now, from a long term cost standpoint on PE, it is going to be going up.  The US stores a lot of natural gas in caverns, and pulls it out when they need it during the winter.  I am going to do my best to explain what is going to happen coming up, and how that is going to affect the cost of parts coming out of your plant.

Natural gas is the main feedstock for producing ethane, which is converted to ethylene monomer, and then into polyethylene.  Natural gas takes up a lot of space, and unlike oil, which has a very high energy per unit volume, it is not easy to store in a liquid form.  Because of this, it is stored in a gas phase, which takes up a huge amount of space (about 625 times more space than if it were cooled, pressurized, and liquefied).  Because we use natural gas for electricity and heating, the US produces more natural gas than it can use during the warm months and much less than it needs during the cold ones.  To solve this, natural gas is stored in either salt domes or other large, hollow, underground caverns, and then pulled out when needed.  It is following the trends that are going on between what is being put into storage and what is being drawn out that hold the keep to what is going to happen with the price of natural gas, and thus, what your PE is going to cost per pound for your to buy now and in the future.

We have had 2 very mild winters in the US, in fact, some of the warmest on record.   2017/2018 is supposed to be mild (because of the La Nina global weather pattern), but it has been far from it.  I study the US Energy Information Administration’s Weekly Natural Gas Storage Report (http://ir.eia.gov/ngs/ngs.html).  We started this winter season (usually late October) with less natural gas in storage than normal, a little less than 4 trillion cubic feet (TCF).  This is below the 5 year average of how much we have had in storage.  The last cold snap that we had have caused some huge draws from storage, averaging about 250-359 billion cubic feet (BCF) per week.  As of the week ended 1/19/18, we were at 2.3 TCF in storage, which is 18.4% below last year’s stock, and 17.5% below our 5 year moving average. These are the facts from the report, but here is how I extrapolate what is going to happen.

We have been pulling about .25-.35 TCF per week out of storage for heating, and on 1/5 we had 2.7 TCF left.  By 1/19, we were down to 2.3 TCF.  We had a mild week before the 1/19 report, and still pulled 2.9 BCF out.  We are at the middle of January.  These next few months represent heavy draw times until the curve starts to flatten out in March then turns positive for gas going into storage in April through October.  As of this week we are going to be way under the 5 year average, and the lowest amount of gas in storage coming out of winter in at least the last 5 years.  They long range models have another polar vortex event on the horizon, which would lead to some huge draws then.  Here is why that is a problem.

All of this means that we are not producing, at current drilling rates, enough natural gas for US demand.  We are not producing gas at the replacement rate we need to keep up with demand, and the difference is getting bigger every month.  This is going to quickly become evident and the price of natural gas is going to rise as we have less in storage.  I don’t know how much it is going to rise, but it will have to rise enough for drillers to go out and start drilling for more natural gas.  It is there, and we are not going to run out, but it has to go up to become more profitable for companies to go get it.  It is at $3.50 right now (+/-), up from under $3.00 within the last couple of month.  If I had to speculate where gas is going to be in the next month or two, I am going to say $4-5.00.

This may not sound like much, but like any market, it is a pendulum.  The natural gas market is going to realize it is short, then price will rise.  Then it will panic a bit because it is going to realize that it is shorter than it thought, and drillers have not drilled and started producing enough to get on the other side of the curve (they want the process to happen by the end of the week when the figure it out), and it is going to way up.  Then there will be a rush to go and start drilling a bunch of wells, more gas will come online (think in the year to two year time frame), and prices will settle back down.

One last thing.  More issues in freight as there are trucker shortages, the new electronic log regulations which is actually affecting how much drivers can drive, and tightness in the market.   Please go easy on your suppliers as these issues are getting in the way of JIT shipping.  I talked about this before, but actually got a big formal letter from a distributor on this earlier this week, so it is not just my guys feeling it.

I hope that even though long winded this is helpful to everyone on what you need to be thinking about for material supplies going forward.